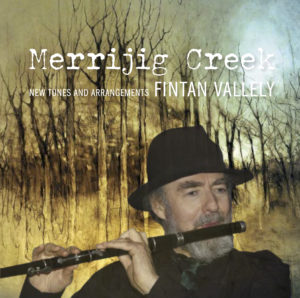 Here are new tunes and arrangements on concert flute marking Fintan Vallely’s fifty-seventh year playing music. With him is his sister Sheena Vallely, also on flute, who as a painter and musician has lived much of her working and playing life in London and Bristol. Framing and highlighting the music with piano melody and accompaniment is their cousin Caoimhín Vallely, a founder-member of the bands North Cregg and Buille. On bodhrán and percussion is Tipperary-born Brian Morrissey, and on fiddle is Donegal player Liz Doherty, of Nomos, Fiddlesticks, The Bumblebees and the international String Sisters. Also on fiddle is Gerry O’Connor from Dundalk, of the band Skylark who played with Eithne Ní Uallacháin as Lá Lugh; with Fintan he also performs the audiovisual concert shows Compánach and Turas. Guitarist Dáithí Sproule, both a soloist and singer, as well as having been member of Skara Brae, has toured and recorded with Altan and Liz Carroll. Fintan is privileged to be buoyed along by the enervating nerve of this company: Sheena’s sympathetic flute pulse, Caomhín’s lift on piano, with Brian accenting moods on bodhráns and shakers. Dáithí is on guitar on track five, Liz is on several sets, and Gerry joins on the finale tunes. The intuitive production and direction input of Niall Vallely (a composer himself, of the bands Nomos and Buille), is greatly appreciated for his patient shepherding of balance, character and vitality in the album.

LISTEN TO A PREVIEW OF THE TRACKS